What will you be learning in this class:

What is "Internet mapping"?

Before the Earthquake (Palace)

After the Earthquake (Palace) 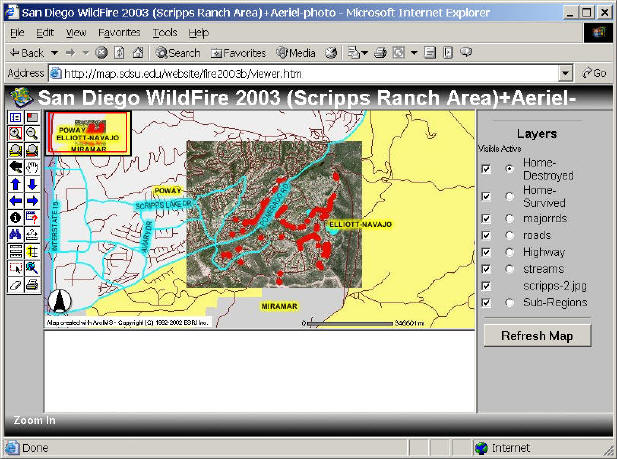 Two wildfires (Cedar and Paradise) savaged San Diego County during the week of October 26.  The wildfires kill 16 people and burned down 2427 homes and businesses (data source: www.signonsandiego.com ).  These fires caused the worst damages in the history of San Diego and California.  This web site (http://map.sdsu.edu) was created immediately on October 27 (Monday morning) to provide web mapping services for helping our local community.  This site is updated daily and provides maps of the San Diego wildfires with various live ArcIMS web mapping services, static maps, and research articles.  Most maps on this site have been created by the faculty, staff, and students in the Department of Geography, San Diego State University.

The advantages of Internet Mapping:

What is "Real-time Update"?  Every second? Every hour? Every day? Every week?

Different applications and contexts will have different requirement of real-time information.

Please fill out the questionnaires and return to me.

We will use Blackboard email function for this class.  Make sure you update the current email addresses in Blackboard.

Technology Demo (Please select ONE week for your Demo Day).

Use Blackboard to Upload your Demo Site and Introduction Information.

The History of the Internet

The icons of network are usually represented in "clouds" in network graphs.  Recently, the term, "cloud computing", has been adopted for network-based computing technology.

From Wikipedia, the free encyclopedia

Cloud computing is Internet ("cloud") based development and use of computer technology ("computing")[1][2][3]. It is a business information management style of computing in which typically real-time scalable[4] resources are provided “as a service”[5] over the Internet[6] to users who need not have knowledge of, expertise in, or control over the technology infrastructure ("in the cloud") that supports them[7].

It is a general concept that incorporates software as a service (SaaS), Web 2.0 and other recent, well-known technology trends, in which the common theme is reliance on the Internet for satisfying the computing needs of the users. An often-quoted example is Google Apps, which provides common business applications online that are accessed from a web browser, while the software and data are stored on Google servers.

The cloud is a metaphor for the Internet, based on how it is depicted in computer network diagrams, and is an abstraction for the complex infrastructure it conceals.[8]

The progenitor of the modern Internet was a network called ARPANET (http://www.cybergeography.org/atlas/historical.html

), set up in the 1970s by the U.S. Defense Department, developing a self-adjustable, decentralized networking system.  The original goal of the ARPANET project was to provide a reliable telecommunications network which would persist after nuclear war.  In 1983, the ARPANET project adopted the Transmission Control Protocol/Internet Protocol (TCP/IP) as the standardized protocol for communications across interconnected networks, between computers with diverse hardware architectures, and between various operating systems.  The dramatic success of the Internet and the popular adoption of TCP/IP pushed network development into a new age.  Along with the rapid development of the Internet, many applications and programs have been developed, such as Newsgroup, Gopher, Bulletin Board System (BBS), Telnet, etc.  The following figure illustrates the screen shot of the Gopher information Client via the Telnet application, which was one of the most popular Internet applications before the World Wild Wed.

The Gopher information client on a Telnet application window.

Description: A 1972 documentary on ARPAnet, the early internet. A very interesting look at the beginnings of what is now a huge part of most of our lives.

Another milestone in the history of the Internet is the NSFNET backbone, which replace the ARPANET and provided a preliminary global network architecture for today's information superhighway.  In 1985, the National Science Foundation (NSF) added five supercomputer centers (NSFNET) to the Internet and create the NSFNET backbone.  Later on, NSF began an effort to privatize the backbone functions and the NSFNET backbone was replaced by a commercial Internet backbone.  At the same time, the NSF implemented a new backbone architecture called very high-speed Backbone Network Service (vBNS), which serves as a testing ground for the next generation of Internet technologies.

The World Wide Web (the Web)

is currently one of the fastest growing applications on the Internet for the public to publish and retrieve information. The original idea of the Web was to serve as a pool of human knowledge, which could allow researchers in remote sites to exchange ideas on a common project (Berners-Lee, et al., 1994). The Web adopts a standardized communication protocol, HyperText Transfer Protocol (HTTP), for disseminating multimedia documents on the Internet. The HyperText Transfer Protocol was developed by the European Laboratory for Particle Physics in Geneva (CERN) in 1990. Later the protocol was popularized with the appearance of Mosaic in 1993, a multimedia browser created at the National Center for Supercomputing Applications (NCSA). The Web provides an integrated method to distribute all types of data across all different types of computers in a unified format, called HyperText Markup Language (HTML).  The main reason for the popular growth of the Web is its powerful capability of presenting multimedia documents on the Internet which can include texts, sounds, pictures, animation, etc. Other Internet applications, such as Newsgroup, BBS, and Gopher, only provide text-based information.

The Web uses hypertext and multimedia techniques to make its content accessible to anyone. People can easily generate home pages by adding pictures, sounds, and hyperlinks in HTML format and create attractive contents on the specific topics. Since the powerful communication and popular use of the Web, many GIS researchers have launched some pioneering research and are developing applications on the Web.

Use the On-line forum (Blackboard) to answer the following questions: (Suggestions: You should write down your answer in the Word or any text editor and then copy/paste to the Forum in case of losing computer network connection or Web server problems )

1. What are the differences between the Internet and World Wide Web?

3. Use different search engine (such as www.google.com, www.yahoo.com , or your preferred search engine) to search for web mapping applications related to Disease Outbreaks, Climate Change, or Flooding. Write a short paragraph (150-200 words) to describe the web map, the URL, and explain whether you like this mapping services or not and WHY.